Home / Новости / “A safety bag between patients and the outer world”: children’s hospice built up a team of like-minded people

“A safety bag between patients and the outer world”: children’s hospice built up a team of like-minded people

An unusual flashmob was launched in social media: “Do not have 100 rubles, but have 100 friends who have 1 ruble” – in such way people were invited to join flashmob and help NGO Belarusian Children’s Hospice. The aim was to support the initiative on building houses for hospice volunteers in the summer camp “Aist”. Yulia Sysoeva, the head of finance department at UNDP, knew Hospice’s needs and launched the flashmob.

“Contribute 1 ruble and pass the baton” was the motto of the action. It was important to take the change in case you contribute more. The information was disseminated between friends and acquaintances and in result 1000 persons joined the flashmob. At the same time the campaign “Inclusive Belarus” was organized at UNDP, which also told the world about the summer camp “Aist”.

“Our aim was not only to raise funds, but also to involve people, disseminate the information about Hospice. It is important to help, especially when you have such inner necessity. That is why I decided to work in the international organization while choosing between international and private company,” said Yulia.

There are 91 active like-minded people like Yulia in the Hospice. They are called “Hospice friends”. The Hospice built the database of such active people, communicated with them, organized events within the project supported by the US Agency for International Development (USAID). The project “Hospice friends” became the winner of the final stage of Capacity Building for Civil Society Organizations in Belarus Project implemented by New Eurasia Establishment.

There was no permanent union of people in the organization although the Hospice activities are well-known. That is why the Hospice decided to create a team that shares interests, supports and helps out. “There were around 30 people when we started to build the database. During the project our database became three times bigger,” pointed out Elena Oshurkevich, project manager and the head of the department on strategic development. “Hospice friends are those, who know the Hospice activities well and help not only to raise money. The friends give contacts, provide patronage, tell about palliative care to others, disseminate our ideas and join our promotional events. They are a peculiar safety bag between our patients and the outer world”. 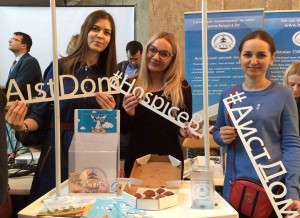 Now the dialog with Hospice friends is built and a plan is to strengthen the community, produce promotion products, since being a friend of the Hospice is an indicator of credibility, knowledge, involvement in good deeds. “We want to expand the community, involve more youngsters and foster the willingness to help, no matter whom, the Hospice or other organization,” continued Elena.

The project “Hospice friends” is not the only project implemented by the Hospice within the Capacity Building for Civil Society Organization Project and financed by USAID. In 2014 in the beginning of the CBCSOP the Belarusian Children’s Hospice won the competition together with other 24 CSOs. All selected organizations worked with invited experts in the sphere of organizational development, made an assessment and set up an organizational development plans.

On the next stage in 2015 CSO projects were financed and organizations implemented targeted aims. The Hospice implemented a project, aimed at developing and strengthening of the volunteer service. In the result of the project the number of involved volunteers doubled. In 2016 the project “Hospice friends” was supported. Thus, the Hospice went through all the stages of the CBCSOP.

“Our participation in the CBCSOP is similar to the visit to an ideal doctor. Imagine you visit a specialist, you have a total body screen and receive a report on how your body works, and together with a doctor you choose a treatment schedule. Participating in the project was a very important experience. We went through all the stages of the CBCSOP and not only identify weaknesses in the sphere of organizational development, but also implemented projects that allowed us to move to a new level in working with two key groups: volunteers and donors. The results of the projects prove this”, continued Elena.